Nice article about my daughter Elizabeth. 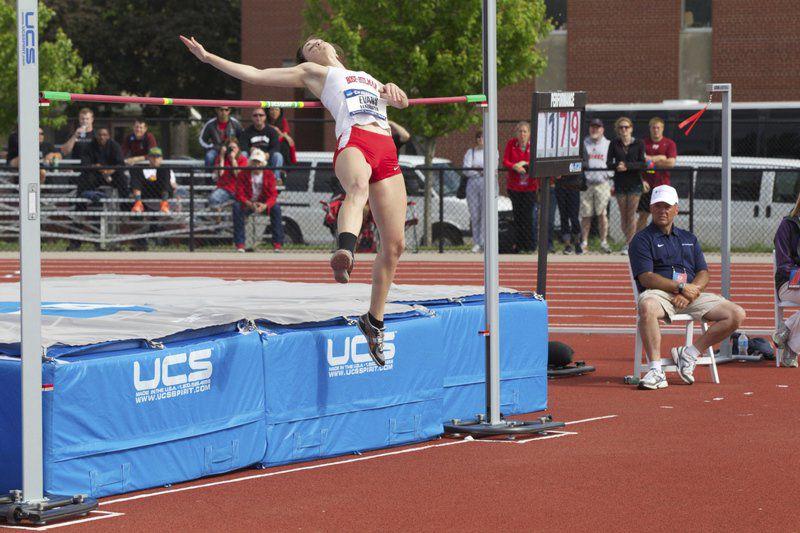 Rose-Hulman's best track and field athletes since Larry Cole replaced Bill Welch as coach in 2004, according to sports reporter David Hughes with assistance from Cole.

She is an ISU alumna so it's appropriate here, I guess. She got a degree at ISU after 3 degrees at Rose, in addition to her athletic success.

Hello Bob!! And all along thought you were using Bob Evans as a reference to the restaurant chain as a pseudonym.

Anyway, I worked with Elizabeth for a few years here at Tredegar in Terre Haute. I graduated from RHIT many, many years ago but am also a life-long ISU fan. Now retired.

Elizabeth had been sick with the flu all week. She had not practiced and was pretty weak. She was there with the full support of the ISU T&F team but was "unattached" and wearing her black "Bicknell" uniform warm up. The competition was ACC, Big 10, Big East, MAC and MVC primarily.

Because of her health, she passed on several of the early jumps at lower heights. I think she started at 5'8" or perhaps a bit higher. I remember she missed her first attempt and I was worried. But she cleared the next time and kept clearing as the competition thinned out. The ISU team was there cheering her on and, interestingly, many of the Bucknell team (dressed in Black and Orange) were intently watching the mysterious "Bicknell" competitor. Eventually, all the competition missed and she was left alone with first place secured and trying to keep going higher.

(And for the casual reader, I checked the 2020 Meyo Results and learned that Liz also won the 2020 Event clearing 1" higher than in 2017. I remember she told me female high jumpers keep improving up to 31-32 years of age and she hoped to improve enough to make the Olympic team.)

Anyway, as an RHIT graduate, it was extremely satisfying to see her top those Power 5 track stars back in 2017.

Afterward, she joined us for dinner and I remember that while we chowed down she hardly ate anything. I don't know if that was her normal diet or if it was due to being under the weather. Then we went to her first hockey game which is a popular and exciting athletic event at Notre Dame which is a perennial contender for the Frozen Four. We then rode back to Terre Haute getting back around 1-2 am.

So, congratulations to LIz and thanks to you and your family for all of the support you have given to her over the years.

Supporter
I missed that meet. It was good to hear that she had people cheering for her even though I wasn't there. Thanks for that. By regular people standards, she doesn't eat a lot usually, sick or not. There have been meets with lesser competition where everyone is out before they get to a height she starts at. Thanks so much for your response.
You must log in or register to reply here.
Share:
Facebook Twitter Reddit WhatsApp Email Link
Facebook Twitter RSS
Top